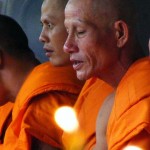 How would Buddhists fight back against a government bent on forcing them to renounce Buddhism?

We’ve been working on illegal and underground groups in the world of Triune. Since all faith is illegal, the government is tasked with stamping out all religions. That means religions have moved underground. We can see secret Islamic, Jewish, and Christian groups easily, especially ones who fight against the government. But Buddhists?

In recent years, real Buddhists have peacefully protested. Would they do the same in our future dystopia? We believe so. We see Buddhists simply refusing to stop their prayers, rituals, and offerings. Perhaps some protests marches, but that’s about it. No terrorism, no assassinations, nothing violent.

So, yes, we will include an underground Buddhist movement, but unlike the others, this will be peaceful. That doesn’t sounds too fun in an rpg, but it makes sense.