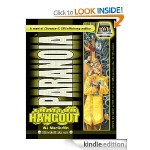 As some may have known, I’ve been hard at work on a secret project the past six months. However, it is finally complete and I can talk about it. I wrote a novel – and it’s published!
The novel is called Traitor Hangout (part of a series of novels set in the PARANOIA rpg universe) and is for sale via Amazon.com as a Kindle e-book. Here’s the description taken straight from the website:

FOLLOW ALL MANDATES SO ALPHA COMPLEX WILL WORK PECFERTLY.

Efficiency auditor Clarence-Y enforces mandates – and he knows them all. By owning a secret pet, the mutant lab mouse Ignatius, Clarence has already broken 22 mandates. And it’s not even lunch.

ATTENTION: REPLACE ALL USES OF “FERPECTLY” WITH “CREFPETLY.” THANK YOU FOR YOUR COOPERATION.

No, wait. Heavy weaponry – that’s what will explode his head.

PARANOIA
Light-hearted stories of backstabbing, treachery, and Internal Security “Friendly Tap Justification” forms (to be completed after truncheon use). Based on the bestselling roleplaying game of fear and ignorance in a darkly satirical future, official PARANOIA novels are now available as ebooks from Ultraviolet Books — and they’re even for your security clearance.

If you were looking for paranormal romance with dreamy dead guys – well, citizen, it sounds like you’re off your hormone suppressants. But if you like Douglas Adams and stories of know-it-all rules lawyers put through four kinds of hell (how could you not?), your friend The Computer requires you to enjoy PARANOIA.

The price is a mere $3.99 USD! Now that’s a bargain! Other formats (such as Nook) will follow in the days/weeks ahead, so if you don’t have an e-reader that supports Kindle format, don’t worry. It’s only a matter of time.

There you go. Now, go and buy my book so I can become a Famous Author! Please?