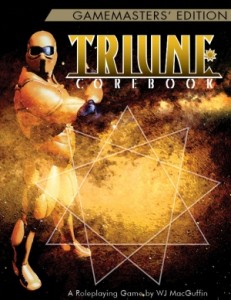 Triune is a unique roleplaying game combining religion, science fiction, and police drama. Players take roles as police investigating angelic and devilish influence in a futuristic cold war between Heaven, Hell, and humanity. But whose side are you really on?

Check out the great reviews!

Triune has some innovative concepts such as: