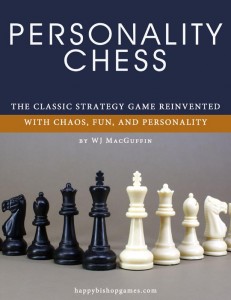 Only $3.99! Available at Amazon.com or Barnes&Noble.

Personality Chess is a chess variant where individual pieces have their own personality and will move accordingly. Can you capture the other player’s rook? Let’s hope it’s not with the pawn Trevor, who abhors violence and might refuse to capture. Bishop Percy might take a fancy to a nearby pawn instead. And Sir Reginald might decide that rook is beneath him and go running for another knight instead.

Then again, maybe Trevor will enforce peace violently and let you capture the enemy piece who captured one of yours last turn. Bishop Percy might move and capture like a rook this turn. And Sir Reginald might force your opponent to waste his next turn moving closer – without capturing – your knight.

Personality Chess does not include a chess board or pieces. Those are so easily found and for much cheaper than we could offer. Instead, it’s a small PDF with all the rules you’ll need to turn sedate chess into a chaotic affair.

Only $3.99! Available at Amazon.com or Barnes&Noble.