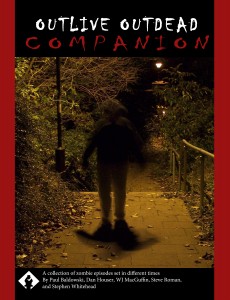 The Outlive Outdead Companion is a collection of five episodes (adventures) for the cinematic zombie roleplaying game Outlive Outdead. Each adventure is set in a different time period and comes with pregens and small rule modifications to make each setting unique and colorful. The adventures include:

Extinction Event: What really killed off the Neanderthals? A tribe armed with clubs and stone axes struggles to survive when Cro-Magnon zombies invade their village.

Le Morte: King Arthur and his knights have fallen, and Mordred’s undead legions roam the land. You must prove your loyalty and courage, take up Excalibur, and end the usurper’s reign. Can you stop zombie knights on horseback, defeat Mordred, and reclaim the Grail?

The Jacobite Dead: Charles Stuart makes a pact with witches to create a Jacobite army of the dead in Scotland. Can highland warriors fight their way to the source before all of Scotland falls to the undead?

Teufels of Belleau Wood: World War One rages in France. US Marines stop the German advance at Belleau Wood, but the French demand retreat. Why? What are they hiding in Belleau Wood?

Sterilization: Humans and aliens live together on a future Earth–until they turn into zombies. The military will sterilize the entire planet in 24 hours. Can you reach the escape shuttle in time, or will zombie aliens stop you?

Each time period will also feature different starting equipment, unique motivations, and new talents and/or capabilities. All are compatible with the Outlive Outdead rulebook, which is required to play. For example, “The Jacobite Dead” includes rules for zombies fighting with weapons and “Sterilization” provides character generation rules for playing aliens and alien zombies.

The Outlive Outdead Companion is planned for release in late May.