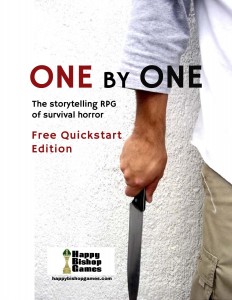 One by One is a survival horror storytelling rpg. As with the game Fiasco, players take turns creating scenes and building a story. But instead of focusing on a crime involving people with poor impulse control, One by One focuses on a monster stalking the characters, killing them off one by one.

Some of the key features of our new game include:

One by One is currently undergoing playtests and will be released as a Kickstarter campaign.