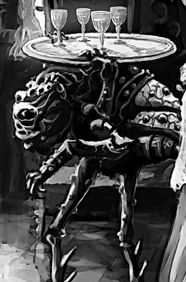 The Chrysalis Revolt: 2709-2710 is a palor narration roleplaying game set on the far-future world of Chrysalis. Players take roles as aristocrats who are attending a social event held by the Empress of Known Worlds. On planet Chrysalis, all labor is done by drudgers, native lifeforms similar to insects that have been genetically modified to be smarter and bigger than normal.

At the end of the game, these drudgers will try to kill the players’ characters. The way to avoid this is by becoming so feared that drudgers are too afraid to attack, or by becoming so anonymous that the drudgers ignore you in their revolt.

This is a parlor narration game, meaning the gameplay is telling stories in turn. A deck of cards is used but there is no game board, battle map, minis, or similar gear needed to play.

It is available here for free. That’s right, a free game. What are you waiting for?